Synthesizing the Project on Scaling-up the Model of Climate-Resilient Housing in Quang Tri Province, Central Vietnam 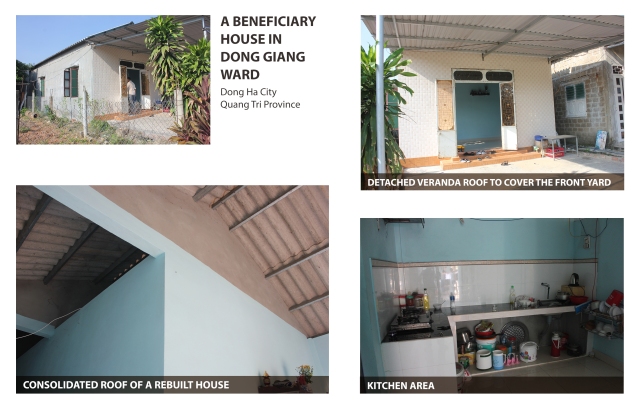 The project was implemented from March 2018 to March 2019 to upgrade housing of poor and near poor families living in vulnerable areas of Dong Ha City, Quang Tri Province, Central Vietnam. There are totally 32 beneficiary households located in 4 urban wards of Dong Ha City: Dong Thanh, Dong Giang, Dong Luong and Ward No.4. The project has been funded by the Institute for Social and Environmental Transition (ISET) under the ACCCRN program in Vietnam.

On 1st March 2019, the Quang Tri Women’s Union, in collaboration with ISET, organized a final workshop to assess one-year implementation of the project, advantages and disadvantages during implementation and to derive experiences and lessons for next steps of rolling out climate-resilient housing models to other in-need families. The project has been highly appreciated by the provincial and local governments, departments and agencies towards its meaningfulness and positive effects to Dong Ha residents particularly and Quang Tri people generally. In spite of the limited funding, the project has significantly improved local awareness and practice of housing construction and renovation. Issues of safety and disaster risk reduction has been paid more attention than the aesthetic ones – the thing that was previously received more attention than safety-related issues in low-income housing construction practices. Stated by the Dong Ha City Government representative, this project plays the role as one of the pioneer projects on climate resilience in terms of integrating safety-ensured measures into low-income housing improvement. Therefore, it has generated a really significant impact on perceptions of not only beneficiary households but also of local stakeholders in Dong Ha City.

With a loan of 25 million VND for retrofitting and 35 million VND for new construction per house, the beneficiary households mobilized other sources of funding such as from their relatives (12% of total cost of housing improvements). More importantly, the project mobilized the significant contribution of beneficiary households in form of in-cash (36%) and in-kind (14%). In addition, the project has mobilized the contribution of local sources such as the local Great Unity Fund (4%) and the City Youth’s Union (2%). These figures show the positive impact of the ISET-financed project in mobilizing various sources of local funding to co-assist poor and near poor households in upgrading their housing towards resilience performance. 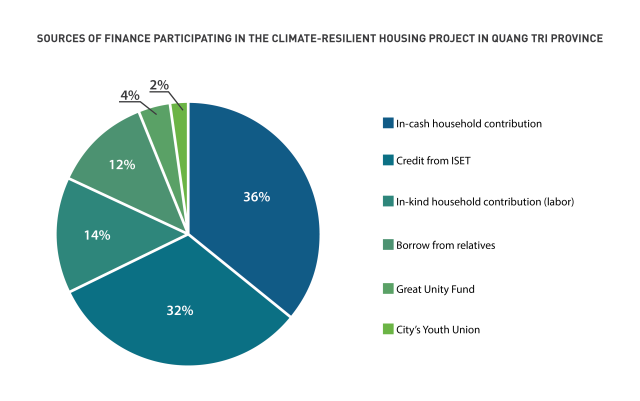 Forms of climate-resilient houses provided in the ISET housing program is also different from each other due to different conditions of the existing old houses and different demands and contributing capacity of each household. However, there are several key principles of construction that all of the houses had to follow to ensure the climate resilience capability. For newly built houses, a solid room made with closed reinforced concrete skeleton and slab was required to include in the house structure. For the retrofitted houses, depending on the existing conditions of each house, wall and roof parts were carefully assessed by an experienced local architect to identify which components should be added to the existing structure and/or consolidated to improve the safety of the house. All technical solutions proposed to the house were discussed with house owners in advance to allow their full understanding and agreement prior to executing housing construction/retrofitting on site.

The project has also raised some important issues that need to be considered in future housing implementation in Quang Tri. First is the necessity of improving communication and collaboration between local stakeholders participating in the project, especially between the hired technical partner(s) and the hirer (e.g. WU). Second is the importance of conducting information and training session in the manner that is locally understandable and applicable. It allows all local stakeholders and vulnerable households to fully perceive the role of climate-resilient housing to their poverty alleviation and family stable development. Third is the need of having flexible design solutions of climate-resilient housing where different households, depending on their own situations and financial capacity, are able to integrate safety-related measures in their housing improvement. In addition, the project has also identified some gaps in the internal communication of WU system in which staffs of lower levels sometimes did not fully capture the aim and purposes of the project, the approach and methods of implementation, and the expected results so that they are likely to transfer insufficient or even incorrect information to local groups and beneficiary households. It may lead to the misunderstanding of at-risk households and potentially hinder the registration of in-need households.

In general, the project has generated a positive impact in Quang Tri Province generally and Dong Ha City particularly. The final workshop has witnessed the high appreciation of the public and private sector towards the importance and vitality of this project in changing local awareness and people’s behaviors towards housing improvement. The project has also built the capacity of local staff, particularly within the WU system, in operating and managing safe housing programs in line with running housing microfinance schemes. Furthermore, the 32 houses already built and retrofitted in accordance with climate resilient principles are also a good lesson learnt for other households nearby when they want to rebuild or retrofit their houses.