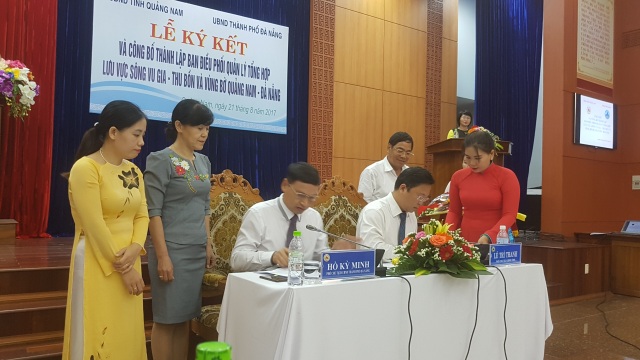 This is the result of a process of active collaboration between the two municipalities, as well as support of the Global Resilience Partnership (GRP) and the Institute for Social and Environmental Transition (ISET). It is expected to offer a constructive platform for addressing current issues in flood risk management and water resource management in the shared river basin.

The RBO will be alternatively chaired by the Vice Chairs of Quang Nam and Da Nang, for periods of 6 months. In the upcoming period, it will focus on assessing flood risks and water shortage and saline intrusion risks in the Vu Gia – Thu Bon basin, and addressing these issues in consideration of the division of water at the different confluences in the river basin, as well as the existing protocol for the operation of hydropower reservoirs upstream of the river basin in Quang Nam province.

More information related to the signing ceremony can be found in the Sai Gon Giai Phong Online article (in Vietnamese) at http://www.sggp.org.vn/da-nang-quang-nam-cung-quan-ly-luu-vuc-song-vu-gia-thu-bon-463043.html

Read more about this project in the UCR-CoP post here.

For more information about the project, please see here