The Dutch have solutions to rising seas

In the waterlogged Netherlands, climate change is considered neither a hypothetical nor a drag on the economy. Instead, it’s an opportunity. 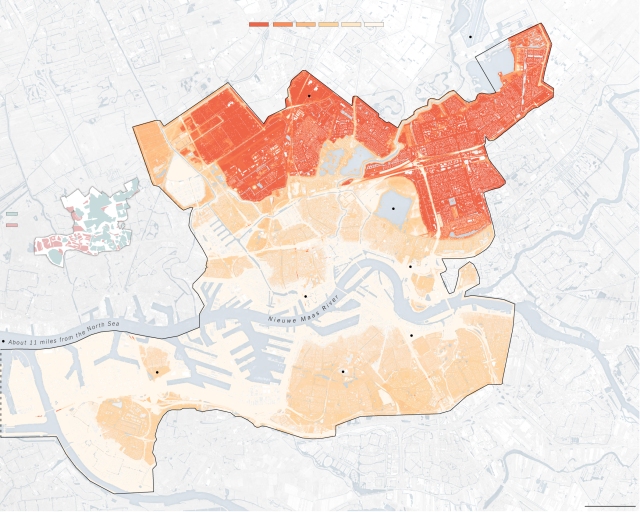 Like cheese in France or cars in Germany, climate change is a business in the Netherlands. Month in, month out, delegations from as far away as Jakarta, Ho Chi Minh City, New York and New Orleans make the rounds in the port city of Rotterdam. They often end up hiring Dutch firms, which dominate the global market in high-tech engineering and water management.

That’s because from the first moment settlers in this small nation started pumping water to clear land for farms and houses, water has been the central, existential fact of life in the Netherlands, a daily matter of survival and national identity. No place in Europe is under greater threat than this waterlogged country on the edge of the Continent. Much of the nation sits below sea level and is gradually sinking. Now climate change brings the prospect of rising tides and fiercer storms.

From a Dutch mind-set, climate change is not a hypothetical or a drag on the economy, but an opportunity. While the Trump administration withdraws from the Paris accord, the Dutch are pioneering a singular way forward.

It is, in essence, to let water in, where possible, not hope to subdue Mother Nature: to live with the water, rather than struggle to defeat it. The Dutch devise lakes, garages, parks and plazas that are a boon to daily life but also double as enormous reservoirs for when the seas and rivers spill over. You may wish to pretend that rising seas are a hoax perpetrated by scientists and a gullible news media. Or you can build barriers galore. But in the end, neither will provide adequate defense, the Dutch say.

And what holds true for managing climate change applies to the social fabric, too. Environmental and social resilience should go hand in hand, officials here believe, improving neighborhoods, spreading equity and taming water during catastrophes. Climate adaptation, if addressed head-on and properly, ought to yield a stronger, richer state.

Dutch thinking changed after floods forced hundreds of thousands to evacuate during the 1990s. The floods “were a wake-up call to give back to the rivers some of the room we had taken,” as Harold van Waveren, a senior government adviser, recently explained.

The Maeslantkering, an immense sea gate conceived decades ago to protect the port of Rotterdam. Photo: Josh Haner

“We can’t just keep building higher levees, because we will end up living behind 10-meter walls,” he said. “We need to give the rivers more places to flow. Protection against climate change is only as strong as the weakest link in the chain, and the chain in our case includes not just the big gates and dams at the sea but a whole philosophy of spatial planning, crisis management, children’s education, online apps and public spaces.”

Mr. van Waveren was talking about a national GPS-guided app created so that residents always know exactly how far below sea level they are. To use public pools unrestricted, Dutch children must first earn diplomas that require swimming in their clothes and shoes.

A water plaza in the Spangen neighborhood of Rotterdam was created to capture floodwater – Photo: Josh Haner

“A smart city has to have a comprehensive, holistic vision beyond levees and gates,” as Arnoud Molenaar, the city’s climate chief, put it. “The challenge of climate adaptation is to include safety, sewers, housing, roads, emergency services. You need public awareness. You also need cyber-resilience, because the next challenge in climate safety is cybersafety. You can’t have vulnerable systems that control your sea gates and bridges and sewers. And you need good policies, big and small.

“This starts with little things, like getting people to remove the concrete pavement from their gardens so the soil underneath absorbs rainwater,” Mr. Molenaar said. “It ends with the giant storm surge barrier at the North Sea.”

Mr. Molenaar, Rotterdam’s climate chief, summed up the Dutch view: “We have been able to put climate change adaptation high on the public agenda without suffering a disaster in many years because we have shown the benefits of improving public space — the added economic value of investing in resilience.

“It’s in our genes,” he said. “Water managers were the first rulers of the land. Designing the city to deal with water was the first task of survival here and it remains our defining job. It’s a process, a movement.

“It is not just a bunch of dikes and dams, but a way of life.”

Excerpts from article by MICHAEL KIMMELMAN on the New York Times. The full article can be found here.