How Two Cities Are Collabrating to Reduce Flood Risk in Vietnam

Da Nang is the third largest city and one of the three largest ports in Vietnam, and the economic hub of the central region. Hoi An, 30 km to the south in Quang Nam province, is a UNESCO World Heritage site and one of the major tourist destinations in Asia. The Vu Gia – Thu Bon river basin is shared by Da Nang and Quang Nam provinces and drains to the ocean through the cities of Da Nang and Hoi An. Rapid urbanization and population densification along the rivers and in the coastal floodplains of both provinces are intensifying flooding issues in the basin, and particularly in the cities of Da Nang and Hoi An. Because of the proximity of the two cities, flood control measures taken to address flooding in one city will impact the other unless actions are carefully coordinated.

The Institute for Social and Environmental Transition (ISET), through a grant from the Global Resilience Partnership, is piloting the creation of a participatory platform and co-production of an integrated hydrologic model for flood risk management across the two provinces. Based on our previous experience in Da Nang, our hypothesis is that the production of a modeling tool will provide both the focused purpose and the information needed to underpin an effective collaborative platform in the basin. Past effort to create participatory platforms for river basin management in Vietnam have largely failed because there was a lack of clear purpose. The integrated model for flood risk management will not only be a powerful tool but will also provide a sense of purpose for the two jurisdictions to collaborate on. 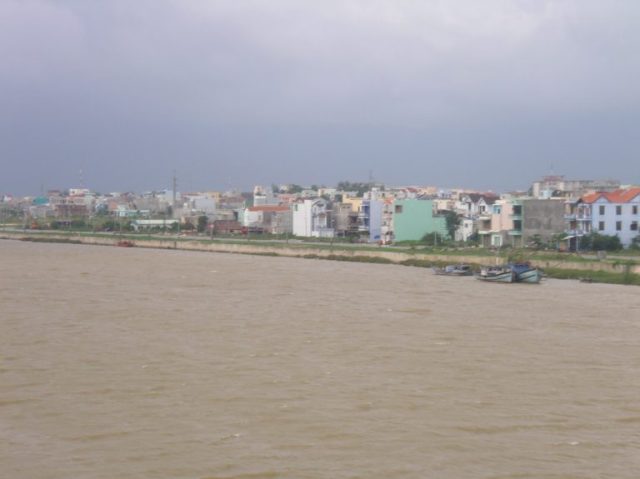 ISET has been working with the city of Da Nang since 2009 on urban climate change resilience, initially through the Rockefeller Foundation funded Asian Cities Climate Change Resilience Network, and more recently with funding from USAID, CDKN, the Asian Development Bank, The Asia Foundation, and 100 Resilient Cities. Elements of the work have included creating multi-stakeholder steering committees and working groups for projects, building capacity across multiple departments, and working with city stakeholders and local technical experts to build and apply several different hydrologic decision support tools. Based on this engagement, it has become increasingly clear to both ISET and Da Nang stakeholders that many of the issues Da Nang faces are basin-wide and require coordination with Quang Nam province.

Developing formal mechanisms for interregional river basin planning, enhancing capacity for natural disaster forecasting and warning, and investing in hydro-meteorology monitoring and early warning for floods, flash floods and reservoir releases were all identified as priority actions in Da Nang’s Resilience Strategy, released through 100 Resilient Cities in September 2016. Addressing any of these requires collaboration with Quang Nam, as the bulk of the basin lies within this province. Therefore, hydro-met monitoring, early warning monitoring and communication, and reservoir operations oversight all fall under the control of Quang Nam. Even before publication of their resilience strategy, Da Nang began developing the agreement needed to establish integrated basin management. This is the first such intre-provincal resource management agreement in Vietnam that is driven by the local stakeholders.

One of the key elements of this collaboration will be to meaningfully engage with vulnerable communities within both provinces. ISET will work with the organization CARE to engage local stakeholders and participants from poor and vulnerable communities. Flood resilience relies on the ability of people at the household and community levels to understand and make informed decisions when faced with flood-risk. It is therefore vital that communities participate in the learning process and have their concerns voiced, both to empower them and to ensure their concerns are understood and addressed.

This project plans not only to engage local communities but also to inspire national policy makers. The government of Vietnam is working towards distributing water management in the country into six water management units, but they have no prior experience on which to base guidance about how to implement this change. Consequently, the Quang Nam-Da Nang River Basin Organization is the focus of a great deal of national attention. Success in this project is likely to be incorporated into national policy.

(Blog based on technical report by Karen MacClune. Originally posted by ISET)