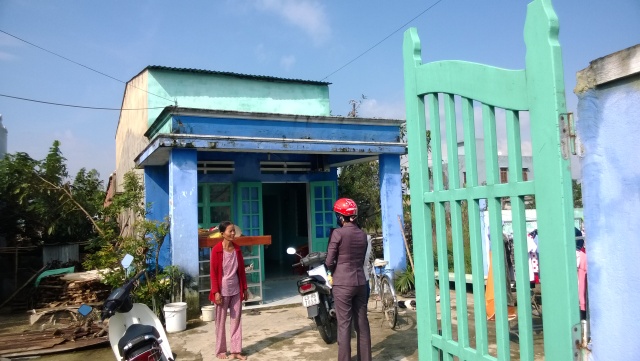 In front of a storm resistant house in Da Nang. Source: ISET

Hanoi, November 24, 2016  –  Vietnamese cities are leading the response to climate change by adopting measures to reduce the risk of future climate disasters. This was the message shared in the international workshop “Sustaining Urban Resilience in Vietnam – Lessons from 7 years of ACCCRN” organized in Hanoi by the Institute for Social and Environmental Transition (ISET), the Country Coordinator of the Asian Cities Climate Change Resilience Network (ACCCRN) program in Vietnam.

Vietnam is one of the five countries in the world most vulnerable to climate change impacts, because of its long coastline and low-lying coastal and delta areas. Climate change will probably bring more extreme precipitation, storms, floods and droughts to Vietnamese cities, which are expanding rapidly, especially in coastal areas, exposing more and more of their population, infrastructure and economic investment to these risks.

In 2008, the Government of Vietnam approved the National Target Program on Climate Change (NTPRCC), which identified climate impacts as a threat to the country’s social and economic development and promoted adaptation actions to respond to these. In 2009, the Rockefeller Foundation selected 3 Vietnamese cities of Can Tho, Da Nang, Quy Nhon to become part of its regional ACCCRN program, joining 7 other cities in Thailand, India, and Indonesia. This program provided technical support and capacity building to enable city governments to plan for greater resilience to climate change, and then supported implementation and learning activities. The Institute for Social and Environmental Transition (ISET), was selected to lead the ACCCRN program in Vietnam. 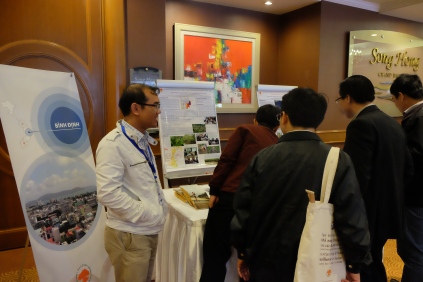 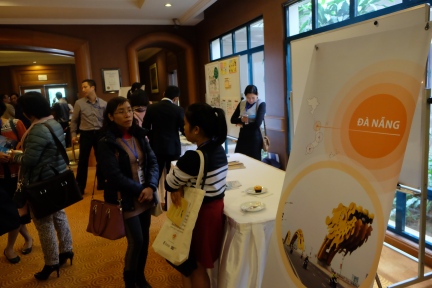 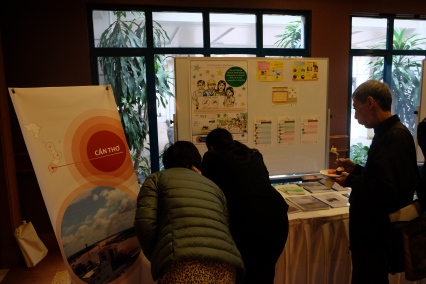 After 7 years of the ACCCRN program implementation, the three cities of Can Tho, Da Nang and Quy Nhon have seen considerable improvements in areas of climate change adaptation, and urban climate resilience. Particularly, under ACCCRN, in each of three cities, a new Climate Change Coordination Office was established, to be the first local agency responsible for coordination of resilience planning and interventions with other technical departments of the provincial governments, as well as for climate data collection and analysis. With support from ISET and from the Rockefeller Foundation, the three Vietnamese cities have developed flood management projects, early warning systems, riverbank erosion control, stormproof housing and many other initiatives to reduce their vulnerability to climate change impacts according to careful evidence-based planning and priority-setting.

Dr. Michael Digregorio, Representative from The Asia Foundation said “At the city level and provincial level, they tend to rely on the central government because they don’t have the judgement or authority to go outside the standard and they don’t have enough study to support them”. 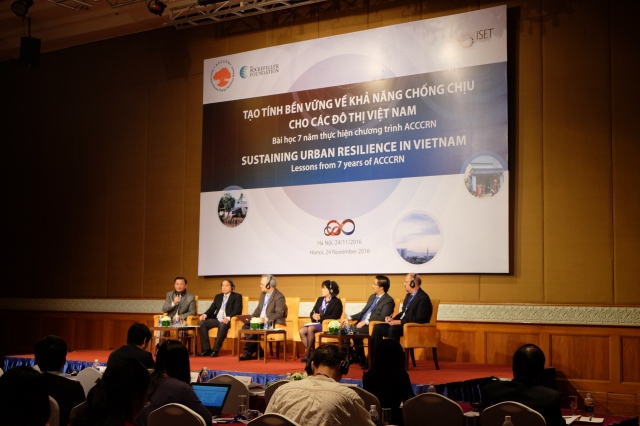 As the Country Coordinator of ACCCRN program in Vietnam, ISET has worked closely with provincial partners, coordinating urban climate resilience efforts with national ministries, research institutions, international agencies, NGOs, and other active practitioners in the field to support cities to tackle these challenges. This workshop, which hosts this diverse group of actors, was an important opportunity for extensive peer-to-peer exchange as well as local and national policy learning.

“A key part of ISET’s approach in designing the ACCCRN program in Vietnam is a focus on local engagement and capacity building through involvement of local partner —or ‘learning by doing’—so that ACCCRN impacts can extend well beyond its timeline and funding to inspire local and national actions and support future policies. This is especially important in the uncertain context of climate change and urban development in Vietnam”, emphasized Ms. Ngo Thi Le Mai, the Country Coordinator of ISET in Vietnam. “The ACCCRN funding program in Vietnam is completed, but its work and influence is still expanding in these three cities and beyond.”

The Institute for Social and Environmental Transition-International (ISET-International) collaborates with local partners to build resilience and catalyze adaptation to social and environmental change. We particularly focus on strategies that address the fundamental challenges change poses for marginalized populations and those who lack the resources to adapt. Our work brings together theoretical and scientific insights with social engagement, local knowledge, and shared learning to identify practical strategies at the local level and to foster the growth of applied knowledge. ISET has developed the core methodologies that ACCCRN country and city partners have used to understand climate impacts, vulnerability, and to undertake resilience planning. For more information, please go to www.i-s-e-t.org.

For further information about the program, please contact infovn@i-s-e-t.org

Read a covering of the workshop on Vietnam News at: http://vietnamnews.vn/society/346885/urban-resilience-undermined.html

Watch the program Sharing Vietnam on ACCCRN and this workshop by VTC10 at: http://netvietvtc10.com/chuong-trinh/11424/sharing-vietnam-30-11-2016