29 New Government Join the Under2 Coalition, Driving Implementation Of the Paris Agreement 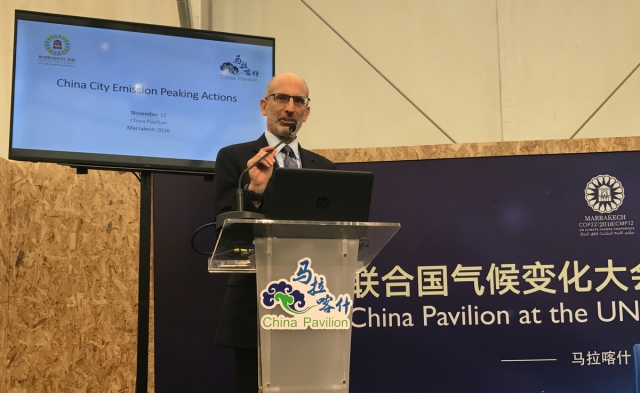 Ken Alex, Senior Policy Advisor to California’s Governor Jerry Brown and the Director of the Office of Planning and Research, speaks at the Under2 Coalition signing ceremony at the COP22 China Pavilion

LONDON: 29 new signatories have joined the Under2 Coalition at a high-level ceremony at COP22 last Friday, demonstrating the strength of the coalition in both highly industrialized regions and across developing and emerging economies.

The new signatories comprise the Australian Capital Territory, the Indonesian provinces of South Sumatra, East Kalimantan and West Kalimantan, the Italian region of Abruzzo and the Mexican states of Tabasco and Michoacán. In addition to them, 23 city members of the Alliance of Peaking Pioneer Cities – including Beijing – have also endorsed the coalition.

The Under2 Coalition – of which The Climate Group acts as Secretariat – is the premier, high-ambition, sub-national government coalition in the world, bringing together states, regions and cities willing to commit to limiting greenhouse gas emissions to 2 tons per capita, or 80-95% below 1990 levels by 2050.

“These new signatories show how Under2 is moving from commitment to implementation and action,” says Libby Ferguson, The Climate Group’s States & Regions Director, “keeping strong momentum for climate action post COP21 and the recent entry into force of the Paris Agreement.”

Damian Ryan, Acting CEO at The Climate Group, said: “With the Paris Agreement entering into force last week, all levels of government in every part of the world need to come together and push forward solutions to secure a climate safe future. This unique coalition of states, regions, cities and nations is needed now more than ever.”

Established in 2015 by two leading members of The Climate Group’s States & Regions Alliance –  Californiaand Baden-Württemberg – the Under2 Coalition has significantly increased its global reach alongside its drive to deliver.

To date, a total of 165 jurisdictions – representing 33 countries and six continents – have signed or endorsed the Under2 MOU, the Memorandum of Understanding that refers to the goal of limiting warming to below 2 degrees Celsius. Such a threshold, indicated by Intergovernmental Panel on Climate Change scientists as the limit to avoid the worst effects of climate change, has been recognized also by the Paris Agreement.

At the climate negotiations that ultimately led to such historic accord, 123 jurisdictions had signed the Under2 MOU and committed to keep their emissions in line with the 2 degrees goal. That important climate pledge has today moved to the crucial implementation of the Paris Agreement.

Ricardo Fitz Mendoza, Secretary of Ministry of Energy, Natural Resources and Environmental Protection of the State of Tabasco, highlighted the importance for infra-national governments of tackling climate change with a strong, unified voice. “Because the climate impacts continue to occur irrespective of borders, and Tabasco is a territory highly vulnerable to these impacts,” he underlines, “the State Government is firmly committed with national and international efforts to combat climate change and mitigate the risks associated with sustainable development, including joining the Under2 Coalition to strengthen this commitment.”

“Canberra has some of the most ambitious renewable energy targets in the world and is well on track to reaching 100% renewable electricity by 2020 and being carbon neutral by 2050,” said Shane Rattenbury, Minister for Climate Change and Sustainability for the Australian Capital Territory. “Committing to the Under2 Coalition is a great opportunity for Canberra to take the stage as a world leader on climate change and clean energy and share our strong progress with other cities.”

“Science has already indicated we must reach carbon neutrality by 2050, if we want to limit global warming,” says Libby Ferguson. “To do so, it is crucial that governments at all levels set out their pathways consistent to such a compelling target. Under2 creates a space that supports government peers to do this.”

The Under2 Coalition is helping forward-thinking governments to achieve their fundamental climate commitments, bringing together governments representing over 1.09 billion people and US$25.7 trillion in GDP, which is over 14% of the global population and 35% of the global economy.

California is already showing the importance of setting a clear pathway to achieve its bold climate goal of reducing its emissions by 80% below a 1990 baseline. Today, the US State and the World Bank, in partnership with the Under2 Coalition and the Alliance of Peaking Pioneer Cities, announced a Memorandum of Understanding to enhance such sustainable, low carbon strategy. In particular, a series of initiatives will focus on carbon inventory methodology, decarbonization pathway to 2050, and capacity building for sustainability strategies in Chinese cities.

California’s pathway also shows the value of collaboration in the international field of policies and climate. “Policy learning and sharing is crucial to scale up successful climate initiatives around the world,” underlines Libby Ferguson. “For many years The Climate Group brought together state and regional government peers to share policy successes. Through the Under2 Coalition, we hope to expand this work supporting policy learning across different levels of government and with different circumstances. This is critical to deliver global impact and support implementation of the Paris Agreement.”

To do so, governments need also to be transparent and accountable about their climate actions and progress. The Under2 Coalition helps them measure their emissions accurately and track progress through initiatives such as the Compact of States and Regions, the pioneering initiative that catalyzes climate change mitigation through inventory development, target setting and strategy development.

“The Under2 Coalition is driving global climate leadership by demonstrating the art of the possible,” concludes Libby Ferguson, “that net-zero ambition is achievable, desirable and delivers results.”