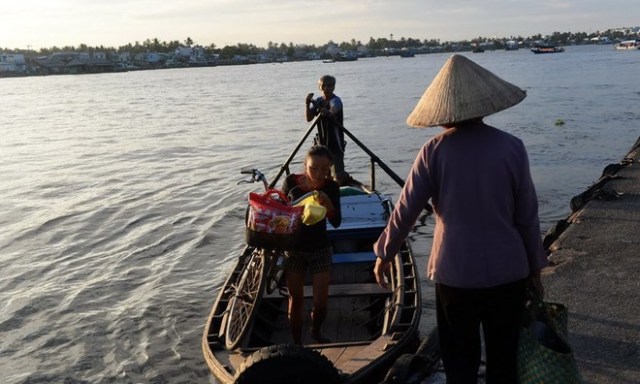 People getting off a boat at a boat station on the Mekong river in the southern city of Can Tho. Nearly 40 percent of Mekong Delta could be wiped out due to climate change by the end of this century, according to an updated scenario by the environment ministry. Photo: AFP/Hoang Dinh Nam

Nearly 40 percent of the Mekong Delta could be wiped out.

Several coastal areas in Vietnam are likely to become the victims of climate change and be under water by the end of this century, according to Climate Change and Sea Level Rise Scenarios for Vietnam released by Ministry of Natural Resources and Environment on Tuesday.

If the world does not act upon reducing greenhouse gas emissions, by the end of the century, sea levels could rise by nearly 1 meter. Under this scenario, 38.9 percent of the Mekong Delta, 17.8 percent of Ho Chi Minh City, 16.8 percent of the Red River Delta and 1.47 percent of Central Vietnam will be submerged.

The most vulnerable areas in the Mekong Delta, which currently accounts for half of Vietnam’s rice production, are the provinces of Hau Giang (80.62 percent at risk of being submerged), Kien Giang (76.86 percent) and Ca Mau  (57.69 percent).

The Mekong Delta is already struggling to survive from drought and saltwater intrusion.

In the central region, Thua Thien Hue is the most vunerable province with 7.69 percent at risk, while Nam Dinh, Thai Binh and Quang Ninh are the most at risk from rising sea levels in the north.

In addition, parts of some islands including Van Don in Quang Ninh, Con Dao in Ba Ria Vung Tau and Phu Quoc in Kien Giang are likely to be lost. The Paracels Islands, which are claimed by Vietnam but controlled by China, are more exposed to rising sea levels than those in the Spratlys, according to the report.

The ministry recommended that vulnerable locations focus on building irrigation systems that can lower the projected damage and adapt to rising sea levels and climate change.

The United Nations has warned that if sea levels rise by one meter, Vietnam will face a loss of $17 billion each year; one fifth of the population or some 18 million will be homeless and 12.3 percent of farmland will disappear.

Even if the world manages to keep temperature increases within 1.5 – 2 degrees Celsius above pre-industrial levels as agreed in Paris last December, Vietnam would still face a rise in sea level by around half a meter. That means the country will see 6.7 percent of the Red River Delta, 4.5 percent of the Mekong Delta and 11.4 percent of Ho Chi Minh City under water.

Vietnam is considered one of the countries most at risk from climate change, with annual losses averaging $1.9 billion or 1.3 percent of gross domestic product as a result, Deputy Prime Minister Trinh Dinh Dung told a conference in Hanoi on Tuesday.