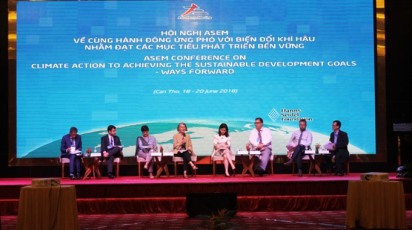 ASEM’s pioneering role as a key driver of economic growth and innovation in the 21st century and its contributions to international efforts to address global challenges were highlighted at a two-day conference that ended in Cần Thơ City yesterday.– Photo baogiaothong.vn

CẦN THƠ CITY – ASEM’s pioneering role as a key driver of economic growth and innovation in the 21st century and its contributions to international efforts to address global challenges were highlighted at a two-day conference that ended in Cần Thơ City yesterday.

“The experiences and intellectual inputs shared by representatives from member countries of the ASEM shows that ASEM has the ability to champion multilateral co-operation, including the fulfilment of the Paris Climate Agreement and the 2030 Agenda,” Nguyễn Minh Hằng, ASEM SOM leader for Việt Nam, said .

“The efforts and results of the Asia – Europe co-operation achieved here could and should be further promoted and expanded to make ASEM a unique platform for dialogue, mutual understanding and co-operation, and more action-oriented and relevant in the evolving global setting, for the benefit of our people and businesses,” she said.

She said the Asia-Europe Meeting (ASEM) Conference on Climate Action to Achieving the Sustainable Development Goals – Ways Forward ” is a vivid manifestation of ASEM’s role in and meaningful contributions to promoting climate action and advancing collaborative implementation of the Paris Agreement and the 2030 Agenda for sustainable development”.

The ASEM Conference on Climate Change Response came at a time when the international community is exerting enormous efforts for climate action and ASEM is setting new directions for co-operation as the Forum enters its third decade of development.

The conference recognised and agreed on the need for concerted climate actions for sustainable development, she said.

Hằng thanked all delegates for their participation and inputs to make the conference a success, with many important objectives being achieved.

These efforts would help address key development issues, fostering new impetus for a green and low-emission economy and building resilience in each country, community and citizen, she said.

Most importantly, the conference also came up with concrete recommendations on how best ASEM could strengthen Asia-Europe co-operation in response to climate change for sustainable development, she said.

The conference was also an important preparatory step for the forthcoming 12th ASEM Summit to be held in Brussels in October and the 14th ASEM Foreign Ministers’ Meeting in Spain next year.

As the deadlines for many sustainable development goals and nationally determined contributions that have been set out by international organisations are drawing near, all delegates agreed that ASEM members should continue to host more regional and global conferences in the area of climate change during the course of this year, she said.

Doing that would allow ASEM to continue to prove itself as an inter-regional co-operation forum that makes great contributions to global efforts not just in climate change response but in other areas as well, she added. –VNS